Greeting: It veered from the plan in that we had intended to come in, sing a song together, introduce ourselves, and only then delve into materials. When the preschool children arrived, the elders were still arriving, and the materials were set out on the table so the participants immediately started engaging with the materials.

Engagement: We paused the engagement with materials for singing “Hinei Matov” and introductions, and the children presented the elders with a drawing they had prepared to give them. It was a moment of connection, and began conversations between the participants about the drawings. For example, one child had written her name, Naomi, and the elder Sia was delighted because she had a granddaughter Naomi who was in labor at that very moment. In another area, a drawing of flowers sparked plans between an Jerry, an elder of 100 years, and Ashley, his five-year-old counterpart to plan a rose garden that they would like to plant together in spring. Most of the elders stayed for snack, and then we ended by singing “Shalom Chaverim.” Before departing, we took photos of the children and elder pairs or trios. We hoped that these photos would serve as reminders in between visits. 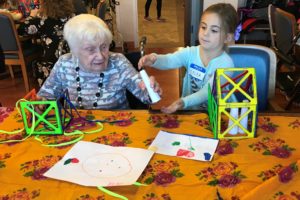 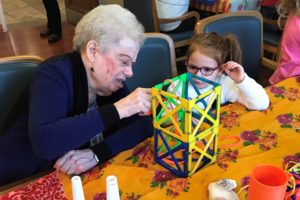 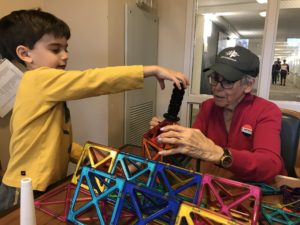 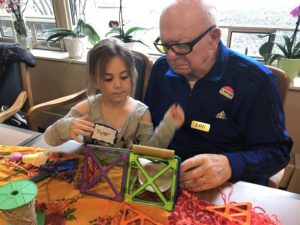 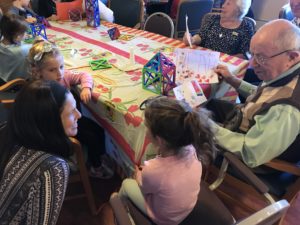 This past visit was the second time we tried joining an established activity at the elder center, rather than our meeting being a separate offering. Rather than going to a more secluded room on the second floor, we went to the social hall on the first floor, where we were joined by our regular grand […]

Moriah ECC: In Preparation For Our First Encounter

The Program: Cherene, Diana, Jen, Arlene and me (Sharon) all met to discuss the possibility of creating a partnership.   The Staff: The first week of October, we asked Ashley and Tome be the point teachers for their respective participating classroom children, and active participants in the discussion. We knew that Tome has a […]